Food may not be the first thing that comes to mind when you are planning a trip to Latin America, but you will certainly be talking about it when you get back.

Immigration from Southern Europe brought Spanish and Italian ideas, the fertile land provides an abundance of natural ingredients and the oceans provide an incredible array of seafood. Add native influences, Asian immigration and unique indigenous flavours into the mix and you’ve got a tasty trip ahead. 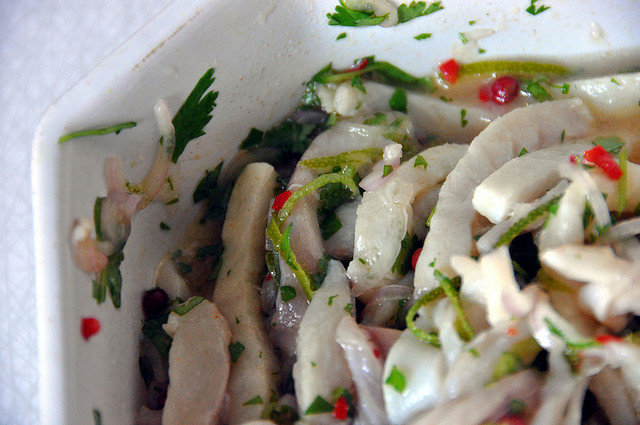 Along Latin America’s Pacific coast, particularly in Chile, Colombia, Ecuador and Peru, you will find ceviche. Made from raw fresh fish, “cooked” quickly in citrus juice, mixed with chilli, red onion, salt, pepper and various other ingredients depending on who’s preparing the dish. Made well, it’s absolutely delicious… tangy, succulent and refreshing.

Cevicherías can be found all along the coast and in the cities, but Peru is probably the number one place to try ceviche and is thought to be the home of the dish.

Another Peruvian delicacy you may want to try is… 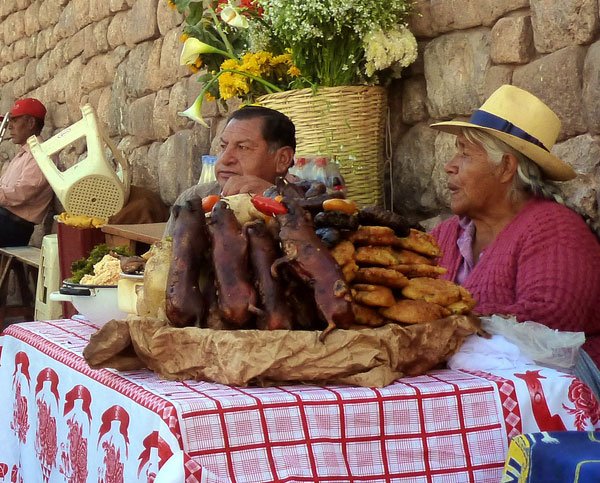 Did you know that guinea pigs orbited the earth before humans? On the USSR’s Vostok 3A space flights of March 1961, the cute little furry chaps joined the space age a month before Yuri Gagarin. Not that they had much choice. They would have presumably been happier left to their burrowing in the Andean highlands. But, then again, maybe not…

While the Peruvian coastline has ample supplies of fresh fish, the mountain highlands do not. That is where guinea pigs (cuy) come in. Peruvians eat an estimated 65 million of them each year. One famous painting of the Last Supper in the main cathedral in Cusco shows the twelve disciples dining on cuy! If you’re not squeamish about eating cute animals, cuy is an unmissable treat. 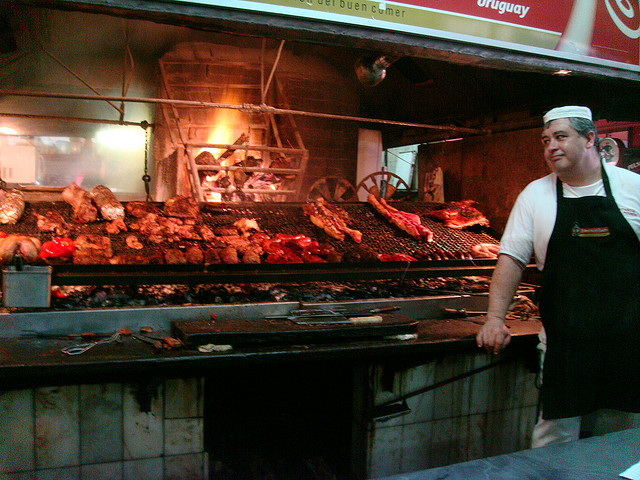 OK, so you can get beef at home, but nothing compares to the steak in Argentina… although they may have something to say about that just over the border in Brazil.

In a Buenos Aires parrilla (pah-ree-sha as the locals pronounce it), wrapped legs of beef hang from the ceilings, the steaks are gigantic and a good example can be cut with the back of your knife. Tourists like the lomo, Porteños go for the fattier (and even larger) bife de chorizo, but you really can’t go wrong. Be aware that unless you order sides, you will just be served a slab of meat!

In  Brazil, churrascarias are the place to go for fine flesh. Often, you take a seat and waiters take it in turns to deliver different cuts of meat to your table. In some places, you have a disc that is red on one side and green on the other and simply leave that by your plate to signal whether you want more food… presumably because you either have a mouthful of food or are too stuffed to move.

If you need some fibre after all that meat, you could consider… 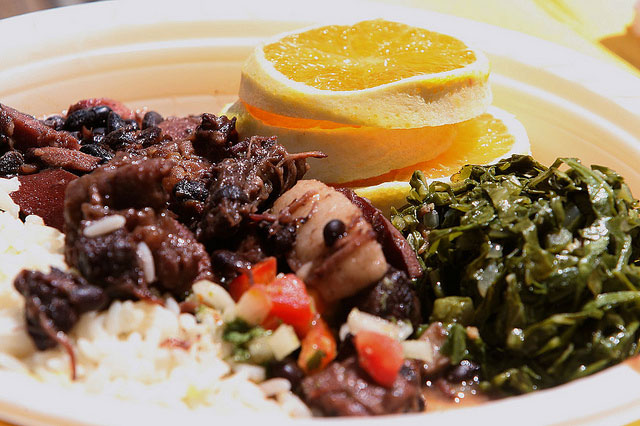 Another Brazilian favourite, although this one imported from Portugal, feijoada is a bean and meat stew served with rice, farofa and greens. It takes hours to cook and is traditionally served at lunch time.

Feijoada is salty and you may want a refreshing beverage to wash it down! If you are in the south of Brazil, look no further than… 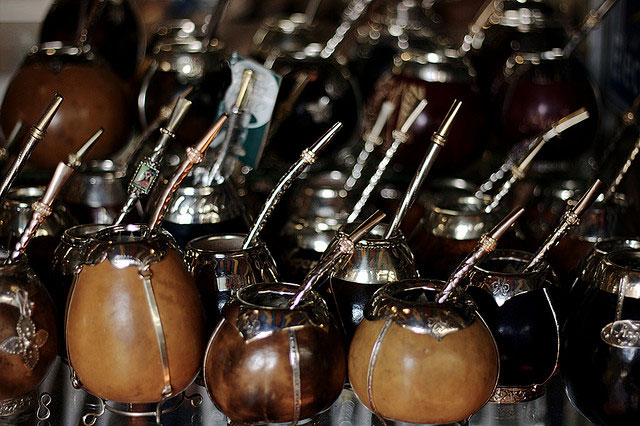 Drunk in Brazil, Uruguay, Paraguay and Bolivia, adored in Argentina, mate is a herbal drink that is best enjoyed communally. It tastes a bit like green tea and is both refreshing on a warm day and warming on a cold day!

Mate is served in a big cup, in which the herbs are mixed with hot water which is then sipped through a metal straw. 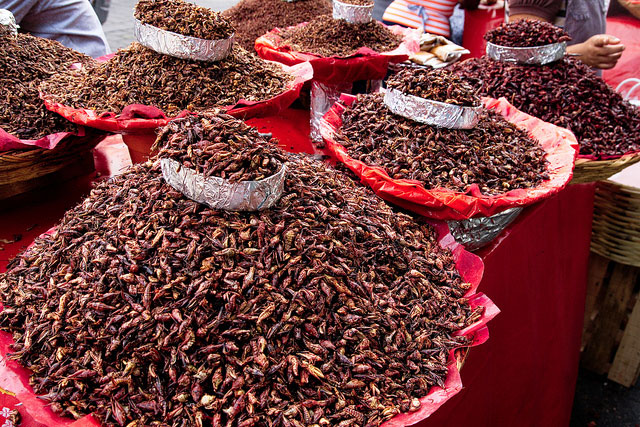 Oaxaca in southern Mexico is famed for two particular culinary treats. Firstly, the local moles are said to be the best in the country. These are rich and spicy, colourful sauces made that are poured over meats and often served at special events. The other famous local dish is chapulines… grasshoppers!

The grasshoppers are toasted with garlic, lime juice and salt containing extract of agave worms. The end result is sour, salty spicy little treats that go particularly well with a nice, cool lager.

And for dessert… alfajores 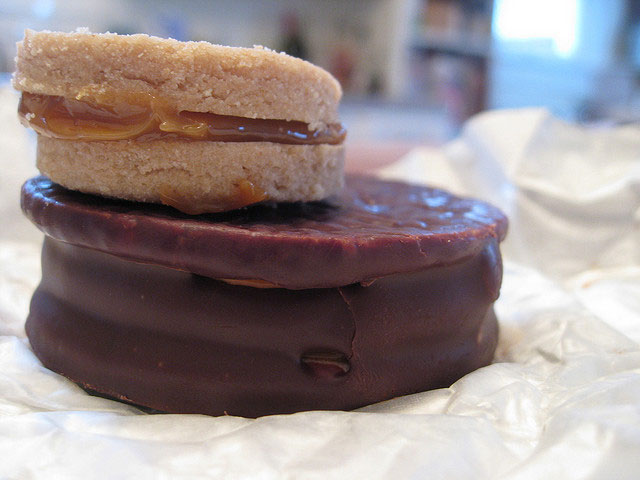 A layer of sweet dulce de leche sandwiched between two biscuits, sometimes with a layer of jam, often with a coating of chocolate… the alfajor is an art form.

They come in all shapes and sizes, with regional variations across the continent. The world’s largest alfajor was made at the Fiesta Nacional del Alfajor in Uruguay in 2010, but size isn’t everything, as the image above shows!

These dishes are just the tip of the iceberg. To find out for yourself how diverse and delicious the food of Latin America can be, you need to get out there! Buen provecho!