Brussels born and bred: we lived it all!

Born in Brussels, Roxane – our French International Admission Centre Manager at ESL Education – certainly embodies the European spirit, having lived in five different countries! These experiences of living abroad have influenced her life in many ways. Have you had any funny or embarrassing experiences while studying a language?

When I was in Bologna during my Erasmus year, I kept going to different places for sightseeing with a Swiss German and a Dutch girl. We switched between English and Italian. One day we started running for the train back from Verona to Bologna and I was in the middle of the two girls. My friend with whom I was speaking Italian was in front of me and the friend with whom I was speaking English behind me. And because we were running and I couldn’t look at the board with the train info, I just shouted “Which binary is it?”. This is wrong because in Italian it would be “Che binario è?”. So instead of saying which platform is it, I just translated the Italian word binario. I invented a new word just because of the stress and the running and the two languages! The Dutch friend started laughing and asked “Which binary, really?”

What is your mother tongue and which languages do you speak at work?

Well French is my mother tongue and I speak it with my colleagues and clients on the phone and by email. English I use every single day mostly with the schools, writing mails and sometimes on the phone. Spanish I use speaking with colleagues here in the office in Barcelona and I´m starting to get the hang of Catalan. When I started at ESL I was working for the Italian market, so I used it every day. When I now have to call an Italian language school I make the most of it. Sometimes I also speak Italian with my colleague Stefano, the International Sales Manager, here in the Barcelona headquarters. But unfortunately it’s the language I use the least.

What would you not be able to do in your current position without the different languages you speak?

Without English and Spanish it would be very difficult, because without English the communication with schools would be impossible. And Spanish does help to integrate now that we are here in Barcelona within the head office. Although English to interact with the colleagues too. Without French I wouldn’t be able to deal with the clients. My colleagues tell me that when I’m speaking with a Belgian my accent and some typical expressions immediately come back! Furthermore we all “lived” it meaning that most colleagues in the International Admissions Centre (IAC) team have travelled and studied languages abroad, which really helps when dealing with clients and explaining that you need to adapt.

To be honest I wouldn’t like to work in a different environment because I’m very used to being around people from all over the world. That’s what appeals to me. And just for the French IAC team with people from three countries, we could go for on hours talking about the different ways we say something or call this or that.

Or in the kitchen, when it comes to holidays. Sometimes we don’t go on holidays but we go home and home is very different for everyone. It’s very enriching to have conversations about where’s home for everyone. Then we discover where the person is coming from and their nostalgia for local food, cultural events or festivals. Because we’re all here in Barcelona, it’s precious to have these conversations and opportunities to learn about different people, places, food and culture because even within Europe, culture can be very different. It makes you curious!

Roxane Ganewski has been the International Admission Centre Manager for the French and Belgian Markets at ESL Education in Barcelona since 2014, after working as an International Admission Officer for the Italian International Admissions Centre at ESL HQ in Montreux, Switzerland. Born in Belgium, she speaks French, English, Spanish and Italian, and is currently catching up with Catalan. Being born and raised in Brussels, she also grew up learning the Flemish language. She has seen and lived in many places: in Oxford while preparing for university, going to university in Brighton, doing two Master degrees in Translation and Tourism in Seville, an Erasmus programme in Bologna and working in London.

While studying English, she started hearing “I’m a Londoner born and bred”. At that time she used to say it wrong “born and bred” making her think of bread. Her favourite place so far is between Switzerland and Barcelona. Living in French-speaking Switzerland after eight years abroad made her feel home again. But Barcelona also has a lot to offer: sun, beach, good weather and many cultural events. 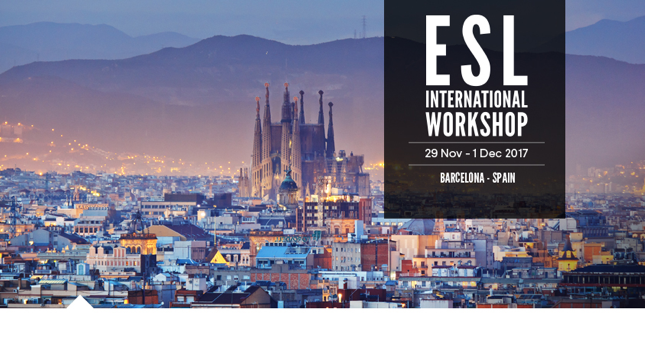 The winners of the 2017 ESL Language Travel Awards!